Under The Skin 4: Q ANZAC Fellows discuss their work

Treasure: A Soldier’s Story searches for archetypal imagery in letters, diaries, photographs and possessions of Queensland soldiers during WW1. The research informs large-scale drawings investigating the personal and collective unconscious during wartime.

The Unfinished War: The Post-war Lives of Returned Soldiers who spent time in the Inebriate Institution in Dunwich.

This project undertakes an in-depth, detailed research into the lives of the returned First World War soldiers whose alcoholism led them to be admitted to the Inebriate Institution in Dunwich on North Stradbroke Island. Further, this project examines the support networks and institutions provided for these men, and the attitudes of the government and society towards the ongoing care for returned soldiers who became alcoholics.

Cairns of words and numbers: Queensland’s Memorial Rolls of the Great War..

This project re-honours, 100 years on, the men and women named on all of Queensland’s Great War memorial rolls of honour by building, in the words of J.S. Manifold, “…a cairn of words over a silent man…”.

General MacArthur called Brisbane the most corrupt place in the South Pacific. During WW2 over a million soldiers passed through what had until then been a small town.

For the young it was an exciting time. John Wayne, Eleanor Roosevelt, Eugene Ormandy, Artie Shaw - the world, it seemed, came to Brisbane and the small town buzzed. But crime flourished.

Under The Skin 3: Q ANZAC Fellows discuss their work

The 2017 Q ANZAC 100: Memories for a New Generation Fellows present their research project: Greer Townshend explores archetypal imagery in letters, diaries, photographs and possessions of Queensland soldiers during the First World War; Lisa Jackson reveals the Post-war Lives of Returned Soldiers who spent time in the Inebriate Institution in Dunwich; and Dr Judith Powell explores policing in Brisbane during the Second World War.

Paper Moon: research towards the development of content for a new novel, based on the stories of Australian deserters.

Victoria researches the profile of and historical circumstances surrounding the deserter or illegal absentee during the First World War. A largely untold story, Victoria is developing a fictional work about a deserter and his life story.

Annie Wheeler, also known as Mother Wheeler provided enormous support for Queensland soldiers and their families during WWl by corresponding with hundreds of them on a regular basis, sometimes providing soldiers with money if needed and helping families to locate their loved ones.

Custodians of Memory, Archivists of Loss: Queensland Women and the Anzac Tradition.

Memorialising WWl has largely been men’s business.  This project examines the way in which women as guardians of family memories, memorialised the war through letters, memorabilia and photographs.These are the ‘archives of loss’.

A house of Fighting (Female)Queenslanders: One Family’s story of Feminism, Empire and the bonds of sisterhood during the First World War

This project maps how both feminism and loyalty to Empire motivated the Paten sisters of Ashgrove to break new ground in the involvement of women with army medical and ancillary services.

Under The Skin 2: Q ANZAC Fellows discuss their work

2016 Q ANZAC 100: Memories for a New Generation Fellows present their research: Ursula Cleary and Dr Maria Quirk explore hidden histories of Queensland’s heroic women of the First World War; Dr Mark Cryle examines memories from the families of First World War veterans to understand the legacy of loss; and Victoria Carless discusses her aim to develop a fictional work based on the plight of First World War deserters.

My Father’s Wars follows the story of her own father who fought in both world wars. Ms Acworth’s story personalises the costs and rewards of massive continental conflict half a world away in the life of a Queensland man and his family, in an intimate and known context.

Watch a live reading of My Fathers Wars

Queensland community thinkers and their social-political formations during World War I: passion and reason for war and peace 1914–19 examines the diversity of opinion and shifting attitudes of Queenslanders during this tumultuous time.

Censors, Conscripts & Queensland – J.J. Stable and the Battle for Hansard is a musical interpretation of the John Oxley Library’s Stable collection which includes Hansard No 37, a record of Premier TJ Ryan’s controversial speech ordered to be destroyed by Prime Minister Billy Hughes.

Queensland’s soldiers: place, identity and stories of belonging in the First World War examines the largely unexplored themes of identify, place and belonging. Using the diaries, photographs and personal letters of soldiers who went to Gallipoli and the Western front, Mr Hogg explores soldiers’ attachment to their home state and identified themselves as ‘Queenslanders’.

Under the skin: Q ANZAC Fellows discuss their research to date

Scratch the surface of any topic and you will expose a wealth of information and ideas — sometimes more than you ever imagined. The inaugural 2015 Q ANZAC 100: Memories for a New Generation Fellows Elaine Acworth, Dr Neville Buch, Dr Robert Hogg and John Thompson and facilitator Ian Townsend, present and discuss their research into the First World War and Queensland’s many stories. 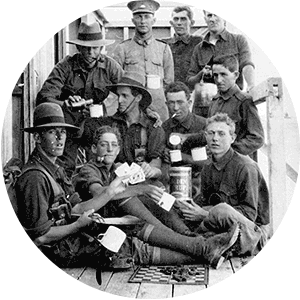 Defending Bowen Jetty against a German invasion during WWI. Negative No: 26878